“Love sets you free” – this I had heard so many times but understood the meaning today. 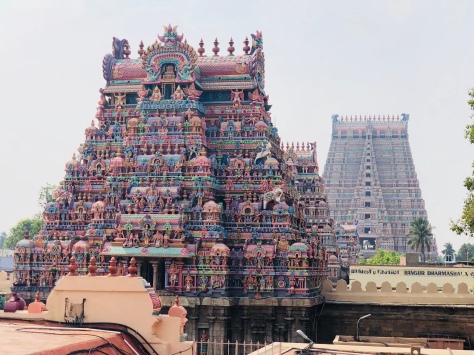 The day started with a walk around the market area around Sri Ranganathaswamy Temple. I like the early morning hustle bustle of a market place around temple. The flower sellers are segregating the various variety they have got and making small packets. Some of them are selling the offering thaali too. The gajra sellers are all set – I have no idea still when do they prepare those. They are always ready – morning to night. 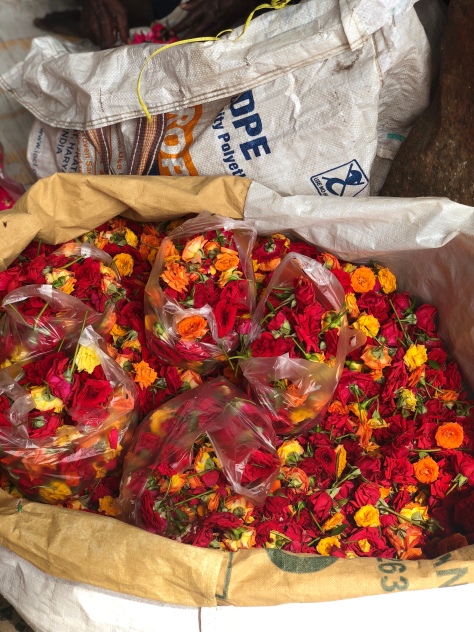 Then there are the shopkeepers – they are the last one to open the shutters. One could check out a lot of things made of stone, metal – brass and copper, plastic, and sarees (not to miss).

Well, one of the main reason to come to this temple is that this is the world’s largest Live temple. I had come to the temple hearing about Ranganathaswamy, only to find myself bewitched with the beauty of Andal. Yes, it was Love at first sight. The idol of Andal is so beautiful. I knew her as a poetess from my graduation days. I was aware about her writings to some extent, but never imagined she was worshipped in such grand manner. 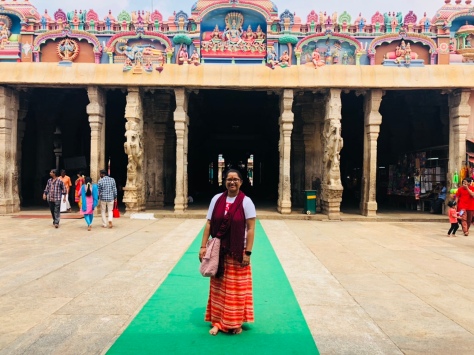 This is Andal’s love story. And the temple is a witness to the greatest love of all times – between Andal and Lord Vishnu. Andal expressed her love for Lord Vishnu in her poetic work and it is believed that her work was filled with so much passion that its her complete work hasn’t been made public. She is the only female Alvar among the 12 Alvar saints of South India. As the story goes, she was found by Periazhwar or Periyalwar, a Perumal devotee, under a tulsi plant. It is also believed that the baby was an incarnation of Goddess Mahalakshmi herself to test the Alvars. She was named as Kothai. As a child, she was completely devoted to the Lord Krishna, as her father. After listening to all His stories, especially about His playful nature with Gopis, she fell in love with him when she grew up. So the admiration had changed into love by the time she grew up. It is believed that she offered the garland once worn by her, to the Lord. When her father got to know this, he was upset and angry. It was only after Lord Perumal appeared in his dreams and told him that He loved the way the garland carried the scent of Andal, and there’s no other way He would accept it. Then it became a ritual. Everyday, Kothai would wear the garland and then it was offered to the Lord. She wore them imagining herself to be His bride. She became to be known as “Andal” or one who ruled the Lord. She was also known as “Choodi Kodutha Sudarkodi”. Another meaning attributed to it is, that which attracts.

When she attained marriageable age, her father got upset as she refused to marry anyone else other than the Lord Himself. She kept a fast for one month, after which she was convinced that the Lord would accept her now. The same night on which the fast ended, the Lord appeared in her father’s dreams and told him to ready her as His bride and get her to Srirangam to the Ranganathaswamy Temple. He also appeared in the king’s dream and asked him to prepare for the arrival of Andal.

The king of Srivilliputhur made all the arrangements for Kothai to be brought in a palanquin, with all bridal finery, accompanied with lots of gifts in the form of elephants, horses, etc. All the people of Srivilliputhur were overjoyed and walked with her palanquin to Srirangam, which is 250kms away from Srivilliputhur.

As soon as the palanquin reached the temple, Kothai just rushed to the sanctum sanctorum of Lord Ranganatha to see Him. The moment she was in the inner precincts, she looked at the Lord. She couldn’t believe that she had finally reached there. She went towards His feet, touched them and there was an electric flash, and she merged with Sri Ranganatha. Her body and soul always belong to Him and she merged with Him finally. In the Bhagavad Gita, Lord Krishna says, “If among the rivers I am Ganga, among the months I am Margazhi”. Andal’s work Tiruppavai is recited in South India during the month of Margazhi, considered to be a highly pious time. Tiruppavai, also known as a sacred hymn is a timeless treatise on devotion. Her life can be seen as a beautiful confluence of passionated love of Radha and absolute surrender of Meera; the yearning for love like Radha and mergence with beloved like Meera.

Though she is well known for her poetic work, she is remembered for her two compositions – Tiruppavai and the Nachiyar Tirumoli. Tiruppavai is a 30 verses poem where Andal imagines herself to a cowherd girl during Vishnu’s incarnation as Lord Krishna. It is a song of love, prayer and surrender. She yearns to serve Him and dedicated her life to Him only. In Tiruppavai, she claims that it’s not only devotees Live for the Lord that matters, but the Lord also should Love the devotee.

“May Lord Krishna rise from his bed; my heart is His throne;

and may He always shine on the throne of my heart!”
The Nachiyar Tirumoli is a poem of 143 verses and the term means sacred sayings of the Goddess. This poem reveals Andal’s longing for Lord Vishnu. She has also used Vedas and Puranas in her works to create imagination.

“famed and expert God of Love,
Take note of the penance I undergo –
My body unwashed, my hair unbound,
My lips without colour, one meal a day.
One thing I have to say, my Lord,
That my womanhood may not be a waste
Grant me this, my life’s aim,

That I become Kesava’s servant-maid.”

Throughout her verse and her life, Andal teaches that love and devotion for the Divine can set us free. 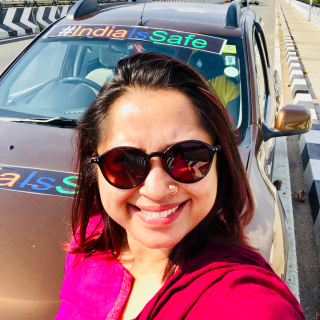